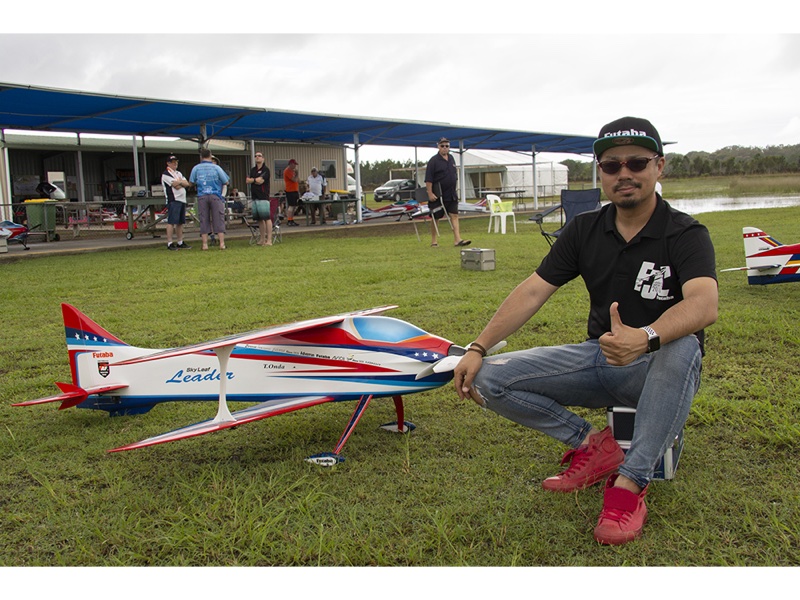 ​This year’s event had attracted the sponsorship of FUTABA Australia from W.A. as the major sponsor.

They also arranged for the current F3A World Champion Tetsuo Onda of Japan to enter. As a World Cup event we also had entrants from England, France, Holland and Germany make the long trip down. This was largely due to the efforts of Russell Edwards (Aus) and Andrew Palmer (NZ) who had spent the middle of 2018 entering most of the European World Cup events. Closer to home the Kiwi’s, who had won the Trans Tasman the week before all (but two), stayed and entered. Dirk (Holland) and Peter (Germany) had also taken part in the Trans Tasman the previous week and were now joined at the Masters by Kevein Caton (England) and Roland (France) along with Onda from Japan.

​The Coolum club hosted the event; the Suncoast Model Flying Club.The field, situated at the end of a small industrial park had its restrictions, which saw the two flight lines skewed to each other to fit within the club’s boundaries. Practice was scheduled for Thursday with the event then running Friday to Sunday. Unlike Tin Can Bay it tipped it down Thursday, so much so practice ceased after about two hours and we were watching lakes from around the pits and most of the flying field. This didn’t deter some intrepid modellers who took out their Assassin flying wings handed one to Onda and spent a wet 45 mins flying in the rain. By the end of the day most of the field was under water along with the specially hired marquee where the models were checked for weight and size and the evening’s BBQ was to be held. The BBQ was moved to Friday and held under the shelter of the club’s canteen area and concreted area in front of it.

Friday saw the comp get underway at 8:00am with one flightline due to the water on the field with the F3A class of 23 entrants. Before they completed a round the 2ndflight line was opened up to Sportsman (3 entrants) along with Advanced (8entrants). Expert (10 entrants) flew on flight line 1 after the F3A boyd finished their round. Although delayed a couple of times due to rain or the operations of the Coolum Skydiving club, Sportsman, Advanced and Expert all flew 2 rounds. Just a note the Coolum tower was in radio contact with our CD to advice the Skydiving operations. Poor ol’ Mario Schembri deserves a mention here. Having flown his family up from Melbourne and driven up himself with his trailer, his flist take off saw a large sheet of covering come free from the model on take-off. Having fixed that with help of Aaron Garle, his second flight surffered a glitching elevator and he landed just after taking off. He then declared he felt unwell and left not to be seen again until Monday as he and his family were struck down with ghastro. 1900kms for 60 seconds of flying.

​Saturday commenced with F3A operating off both flightlines. Rain did stop play a couple of times but by lunchtime we were into round 3 for the other classes. The day finished with a thunderstorm at about 2pm but Sportsman and Advanced completed a further 2 rounds each and Expert needed to finish theirs Sunday. There was to be a catered meal in the marquee but with the efforts of Peter Penissi and contacts of David Garle it was moved to the Coolum Rugby League club. The meal, AGM and auction made for a successful night at a really good venue; thank you David.

​FUTABA Australia had offered an 18SZ radio as a raffle prize as their sponsorship of the Masters and World Cup. 50 tickets were sold off to go in the draw for this excellent prize. At the end of the Auction the raffle was drawn. Colin Briede of W.A. took out this prize.

​Precision Aero Products sponsored the event with the donation of an Allure builder’s kit. After a long drawn out bidding frenzy, the prize to taken by Phil Spence.

​Sunday, final day, Expert completed their 3rd round, interrupted by the Thunderstorm, with a clear blue sky and a N.E. crosswind. Sportsman, Advanced and Expert completed 5 rounds F3A flew 3 rounds of P19 and we were at the sharp end of the competition; the 2 F19 rounds for the top ten F3A pilots. Their flight order had been drawn at Saturday night’s dinner.

This was the order for round 1, round 2 started with Dennis Travassaros flying first. It was an experience to watch Tetsuo Onda fly the F19 schedule. The whole flight was slow and precise matched by the look of concentration on his face.

​As the competition comprised two events, The Australian Masters and a World Cup round, round 1 of F19 would determine the World cup results while rounds 1 and 2 would go towards the Masters thus.