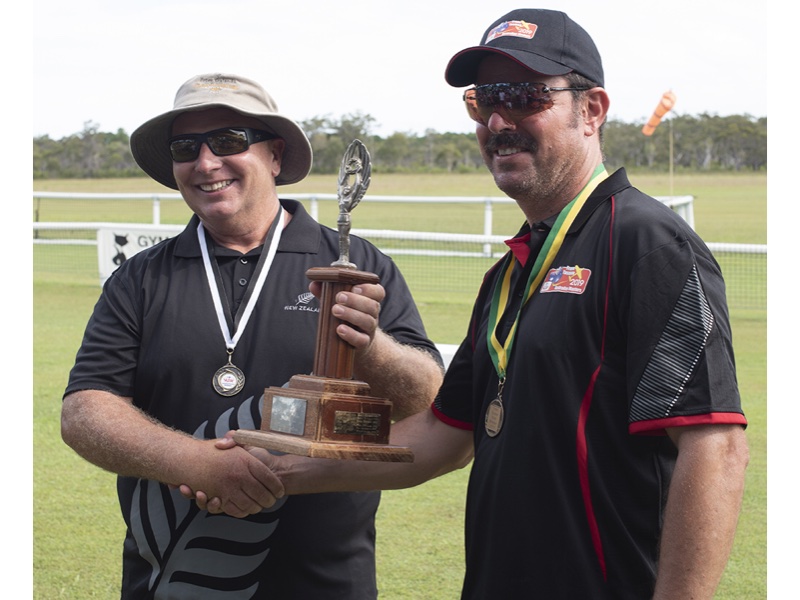 The 2019 Trans Tasman event for F3A was held at the Tin Can Bay Model Aero Club in Queensland.

A 2000km drive for me from Melbourne saw us arrive there mid afternoon on Wednesday. It was not as humid as I had expected and the temperature was around 30 degrees. We were booked into an Air BnB in Rainbow Beach some 30kms from the field; it was magnificent! Well-done Daniel. Friday was to be the first day of practice and although the event was to be held in Tin Can Bay, other clubs had opened their fields to practice also. With around 20 people practising at the TCB field, flying progressed smoothly through the day. We had 15 entrants in the F3A class, which included pilots from Germany and Holland who were here for the Masters, the following week. The Trans Tasman teams in the F3A class comprised 4 for Australia and New Zealand, which was the same for the A18 (Expert) class with a total of 14 entrants in this class. The pilots sorted themselves into an order to ensure everyone there flew through the day. Simon Atkinson was the CD for the event and wanted an 8:30am start on Saturday.

Due to the class sizes and concentration required for judging, throughout the event the judges had a 10-minute break after every 7thflight. We started with two rounds of F3A, which was completed by 1:30pm. Timing would be tight to complete 2 rounds of A18 by sunset so after one round we called it a day and set to resume Sunday morning at 6:30am with rounds 2 and 3 of A18. With many of the competitors camping at the field or staying 5 minutes away in TCB, the start time was not an issue. Daniel and I arrived at the field at 6:15am where David and Aaron Garle had already got breakfast underway. James McAllen was also busy waking up the Notaumatics scoring system and at 6:35 we were under way again. Through the day we completed 2 rounds of A18 and rounds 3 and 4 of F3A’s P19 schedule giving them a total of 4 rounds. The notaumatic scoring system allows contestants to log-in to the system and review their score as soon as it is validated by the judges. This gives you a good idea as to how well you’re doing throughout the competition. To keep everyone on their toes, James McAllen locked everyone out of the system from Sunday lunchtime so placings and scores could no longer be assessed. Monday was to again start at 6:30am with rounds 4 and 5 of A18 and 2 rounds of F3A’s F19 schedule for the top 6 placgetters in the F3A class to fly off for their final placings. This would determine an F3A winner whether they were a part of a TT team or not. The pilots who earned themselves a F schedule fly-off were.

Monday again dawned with perfect flying conditions and A18 was soon completed for their rounds 4 and 5 all finished by 10:40am. After a short break, the F schedule judges were rounded up and Russell Edwards completed a demonstraition flight. This allows the judges to review the whole schedule and discuss errors they saw through the flight making sure essentially everyone is on the same page. Once both rounds of F had concluded it was down to CD Simon and James to compile the results. These were then signed signed off by Russell and everyone assembled.

The Trans Tasman saw the Kiwis defend their 2017 win, dominating in F3A and taking 1stplace in A18. Andrew Palmer (NZ) received the Trans Tasman Individual trophy.

Finally many thanks to the Tin Can Bay club for hosting the event and providing the lunchtime canteen. Thanks too to David and Aaron Garle for their early morning breakfasts especially for the 6:30am starts. Finally to Simon and James and everyone for the comradery throughout the event, brilliant!